Progress and Promise in Atlanta 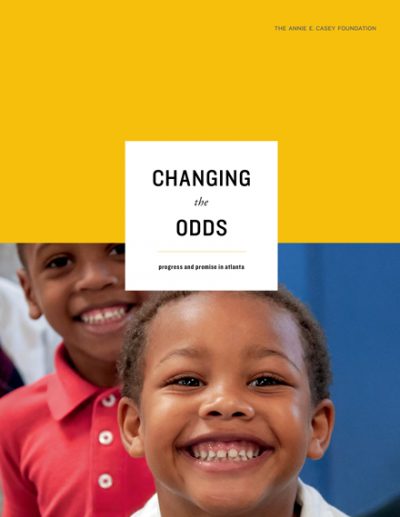 In This Report on Addressing Inequity in Atlanta, You'll Learn

Since 2001, the Annie E. Casey Foundation has been working with Atlanta’s Southside communities to transform high-poverty city neighborhoods and help low-income families and children succeed. While some progress is being made, the gap between Atlanta’s haves and have-nots remains immense.

This report — which is a follow-up to Casey’s Changing the Odds: The Race for Results in Atlanta — focuses on promising policies and approaches that, if enacted on a larger scale, could help dismantle the systemic barriers that have kept too many Atlantans of color from reaching their full potential.

Since the first report, published in 2015, the needle toward equity has moved (but not enough)

In Atlanta, 76% of white residents over the age of 25 have earned a college degree while just 23% of their African-Americans peers have reached this same benchmark.

In Georgia, African-American students who were proficient readers by the end of third grade graduated from high school at nearly the same rate as their white counterparts.

Despite a $3,000 increase in the median annual household income in Atlanta, African Americans and Latinos still earn much less than their white counterparts.

Statements on Inequity in Atlanta

In Atlanta, ZIP code, skin color and family income too often determine whether children receive the resources they need to be healthy and develop on track socially, emotionally and academically.

Though Atlanta has one of the fastest-growing economies of the nation’s large metro areas, it also leads the nation in income inequality.