A tale of two states 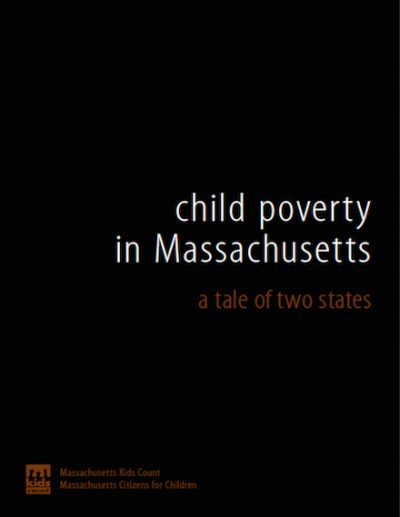 This report explores the scope and sources of child poverty in Massachusetts. It closes by sharing potential first steps and questions to ask related to reducing child poverty statewide.

When it comes to its 1.4 million children, Massachusetts is a tale of two states

In Massachusetts, one in eight kids lives at the federal poverty level, one in four lives in a low-income family, and one in three lives below the Family Economic Self-Sufficiency measure.

Single parents headed 81% of the 84,000 Massachusetts families living below the poverty line in 2006.

In Massachusetts, a higher proportion of black and Latino children live in families that are poor (29% and 36% respectively) compared to white children (7%).

A Call for Change

This report recommends the creation of a formal initiative to spur action and the political commitment necessary to resolve poverty statewide.

Children from poor families are twice as likely to repeat a grade and three times as likely to be expelled from school.