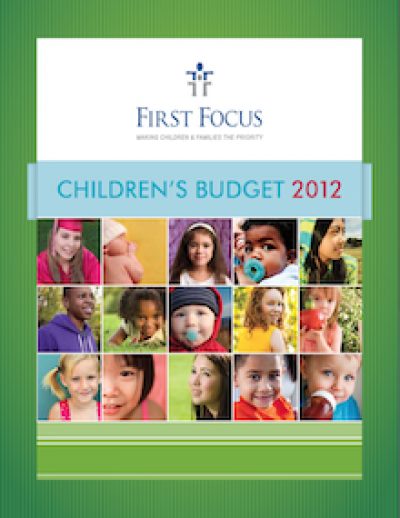 First Focus President Bruce Lesley charges advocates “to speak the truth more loudly and consistently” in an effort to expand federal funding for our nation’s children. One great place to start? By studying up on the financial facts, which fill more than 180 pages of this graph-packed report. Readers will encounter snapshots of federally supported programs for children and learn how much the government has invested in each since 2008. They will also find out what role — if any — the American Recovery and Reinvestment Act has played in boosting program funding streams and how each initiative will fare, should the next Presidential budget plan pass.

Since 2008, federal investments in children have increased from $219.9 billion to $276 billion — a jump of 17.5% when adjusted for inflation. Despite these gains, children currently receive less than 8% of all federal funding.

Twenty-seven individual programs have received budget boosts via the American Recovery and Reinvestment Act (ARRA). These programs — which all work to support children in some way — have received a collective $117 billion in ARRA funds since the stimulus package’s passing in early 2009.

This report offers annual funding information for 210 federally supported children’s programs. It also divides these programs into 10 major categories — such as health, housing and education — and looks at bigger-picture spending trends for each of these sections.

For the first time in recent memory, children’s investments face a confluence of threats during 2012 that could have devastating long-term consequences.

We must develop a strong cadre of new leaders for children — people who understand the issues and will always do the right thing for kids.