Has the Jury Reached a Verdict?

States’ Early Experiences with Crowd Out under SCHIP

By the Urban Institute 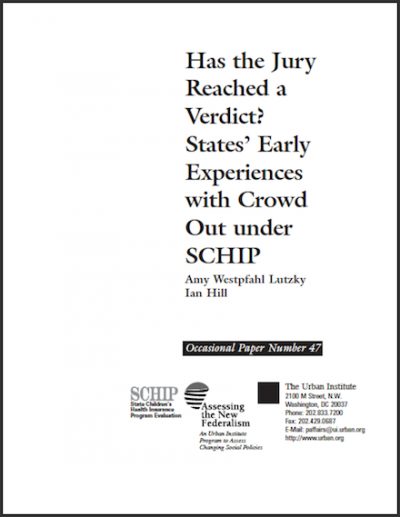 This report shares results of a study that asked if states were concerned about crowd out under the State Children’s Health Insurance Program (SCHIP) and, if so, how they were addressing these concerns. To complete this study, researchers conducted site visits and telephone interviews with representatives in 18 states.

In total, 17 of 18 states under review had adopted policies to address crowd out

Crowd out — replacing private health coverage with public program coverage — was a hotly-debated issue in the months leading up to the enactment of SCHIP.

Pressures to increase SCHIP enrollment have begun to outweigh concerns about crowd out at the state and local levels.

In the 18 states under review, SCHIP and Medicaid officials consistently reported little to no concern over crowd out. Many believed it was a non-issue.

Child advocates believe that SCHIP’s crowd-out policies are particularly unfair to low-income families that had valued insurance in the past, purchased it, and that may now find themselves struggling to make premium contributions for coverage that is possibly both more expensive and more limited in scope than that offered by SCHIP.

As energy has shifted to enrolling every last eligible child in SCHIP, some states have reordered their priorities and considered or enacted policies aimed at boosting enrollment even at the expense of potentially more crowd out.