Addressing Race and Cultural Competence in the Jobs Initiative 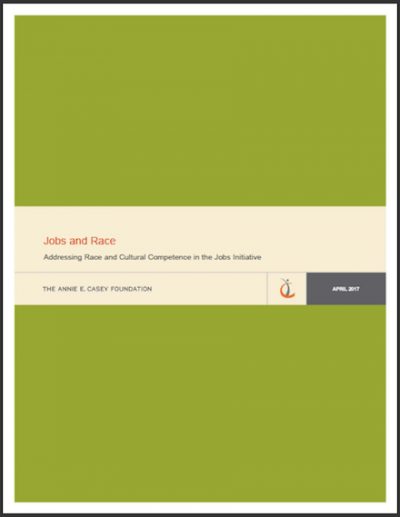 Launched in 1995, the Annie E. Casey Foundation’s Jobs Initiative aimed to boost employment options for young Americans living in low-income communities in six cities. This report looks at how the initiative’s participating sites approached hiring and retention inequities related to race and ethnicity. Readers will learn the successes and challenges of their efforts to address cultural competence and what strategies the sites developed to expand opportunities for job seekers and workers of color.

Jobs Initiative sites enrolled more than 25,000 participants, placing more than 11,200 in jobs across 40-plus projects.

The initiative achieved higher job placement rates for people of color (57% for Latinos, 51% for Asian and Pacific Islanders and 45% for African Americans) compared to their white counterparts (41%). One exception: American Indians and Alaska Native participants, who had placement rates of 38%.

Benefits for the Field

Research related to the initiative generated a definition for soft skills that was specific to workforce development and the problems facing people of color. It also produced a wide range of soft-skills training tools and resources.

One notable misstep: Casey didn’t explicitly instructed sites to incorporate cultural competence as an overarching principle with its own set of milestones and performance targets.

A Rough Start in St. Louis

Regardless of the extent to which issues of race, ethnicity and culture were considered during the initiative’s early years, none of the sites were prepared to address the many barriers people of color faced.

Cultivating cultural competence meant broadening the discussion to include employers, many of which needed tools to help them work with nontraditional and diverse workforces.

The notion of cultural competence provided a broader framework for understanding how race and ethnicity affect employment and retention, placing them alongside a range of characteristics such as cultural diversity, socioeconomic background, language, religion, ability, gender and sexual orientation.