By the Annie E. Casey Foundation, the Carsey Institute, the W.K. Kellogg Foundation 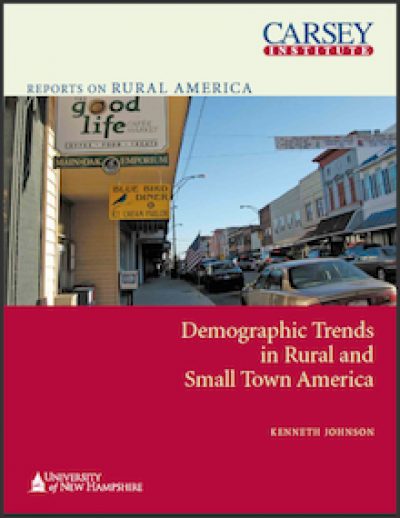 This report takes a long look at the changing face of rural America. It highlights overall population trends and pinpoints the role that various factors — such as geography, economic activity and ethnicity — have played in shaping small-town USA.  It is part of a series, produced by The Carsey Institute, which aims to reinvigorate discussions on policies and programs that invest in rural American life.

A Significant Slice of American Life

Rural America is home to 50 million people and includes 75% of the nation’s land.

Recreation, amenity and retirement counties are the population rockstars of rural America. These areas have grown the fastest in good times and bad and hold the most potential for future development.

One group that’s driving demographic change in rural areas is 20-somethings, who have long traded America’s small-town scene for the economic and social advantages of urban life.

While Hispanics represented just 3.6% of rural America in 1990, they accounted for nearly 29% of the nation’s nonmetropolitan population gains between 1990 and 2004.

Rural America is a deceptively simple term for a remarkably diverse collection of places.

Rural America’s demographic future, like its past, is closely intertwined with the social, economic and political changes underway in the nation and world.