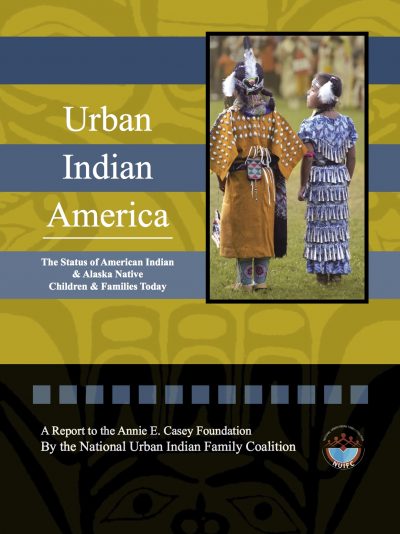 Native people face some of the most dire socio-economic conditions of any group in America, and urban Indians are a group that faces unique challenges. There is a critical lack of research on the issues facing Native families residing in urban areas and the important differences between urban Indians and Indians residing on tribal lands. There is a need for more data to address the unique and common concerns that Native people in America's cities share with each other and with their reservation-based relatives.

It's difficult to accurately define "urban Indian" and hence many go under-represented in crucial data and statistics. This makes it difficult to understand the troubles they have and how services can be improved.

In 2000, there were 4.3 million people who identified as American Indian and Alaska Native alone or in combination. 61% of these Native people did not reside on reservations or other native lands, up from 38% in 1970.

Urban Indian women have considerably lower rates of prenatal care and higher rates of infant mortality than even their reservation counterparts within the same state.

The poverty rate of urban Indians is 20.3% compared to 12.7% for the general urban population. Unemployment is 1.7 times higher and urban Indians are 1.7 times less likely to have a high school diploma.

Urban Indians are more likely to be homeless than non-Indians, homeownership rates are more than 15% lower, and homes they do occupy are 1.8 times as likely to lack basic services like plumbing.

Off-reservation Native children are involved in 5.7 child abuse and neglect cases per 1,000 children per year in comparison to a rate of 4.2 per 1,000 per year for the total U.S. population.

...the needs of reservation-based and urban Native people are not a cause for divisionbut instead for united action to achieve a better future for all Native people.

'urban' is not a kind of Indian. It is an experience, one that most Indian people today have had.