The Financial Crisis and Family Wealth Changes in Low-Income Neighborhoods 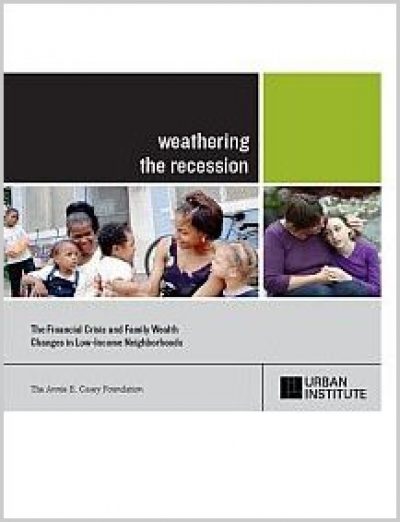 Assets help families meet short-term needs and attain long-term goals, assisting them in weathering financial crises — job loss or unexpected bills — and realizing goals such as owning a home, financing retirement or investing in higher education or a small business. The recent financial crisis has shown both the importance of asset building and that it is by no means a risk-free proposition.

This report sheds more light on how families have fared during the Great Recession, looking more closely at those living in low-income neighborhoods who may see disproportionate effects from the crisis due to targeted subprime lending, less access to traditional credit sources and higher unemployment rates. It uses the variation in household and neighborhood characteristics within and across several low-income neighborhoods that were part of the Foundation’s Making Connections initiative to identify the families most affected by the crisis, and examines the relationship between household and place characteristics and changes in wealth.

Those living in low-income neighborhoods may see disproportionate effects from the crisis due to targeted subprime lending.

The most common assets for families in this study are bank accounts and cars; home equity is the largest single source of wealth.

The foreclosure crisis contributed to the widening racial wealth gap, because housing is the primary asset for low-income families. The median wealth of white households is at least 6.4 times that of non-white families.

Household characteristics matter: Within these low-income neighborhoods, levels of assets and debts in 2008/09 were lower for low-income, low-education, and minority families, than for higher-income, higher-education and non-Hispanic white families. Low-income families disproportionately lost equity during the financial crisis, relative to families who were better off.

Residents’ perceptions of the neighborhood, access to credit and market conditions are all related to wealth holdings.

Homeownership is Better for the Kids

While there was a need to address the lack of underwriting and documentation that supported many of the loans during the housing boom, the swift policy shift in the opposite direction, including calls by some policymakers for a mandatory 20 percent down payment, may create impossible barriers to homeownership for many low-income or minority borrowers.