When Should the State Cease Parenting?

Evidence from the Midwest Study 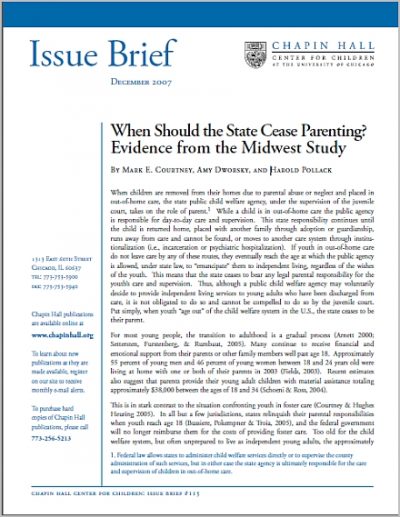 This issue brief presents limited evidence for extending the age for federal foster care reimbursement to states from 18 to 21. The study taps research from three Midwest states. What’s the benefit to kids? Increased success in higher education; increased earnings; and, delayed pregnancy, giving them a better chance at adulthood.

The 19-year-olds who were still in foster care were more than twice as likely to be enrolled in a school or training program as those who had been kicked out at age 18 (67% versus 31%).

The findings from this research are limited since it only includes research from 3 states.

When children are removed from their homes due to parental abuse or neglect and placed in out-of-home care, the state public child welfare agency, under the supervision of the juvenile court, takes on the role of parent.

Thus, although a public child welfare agency may voluntarily decide to provide independent living services to young adults who have been discharged from care, it is not obligated to do so and cannot be compelled to do so by the juvenile court.

Our findings provide support for the efforts of those who are seeking to amend Title IV-E of the Social Security Act to provide federal reimbursement to states for the care and supervision of foster youth until age 21.