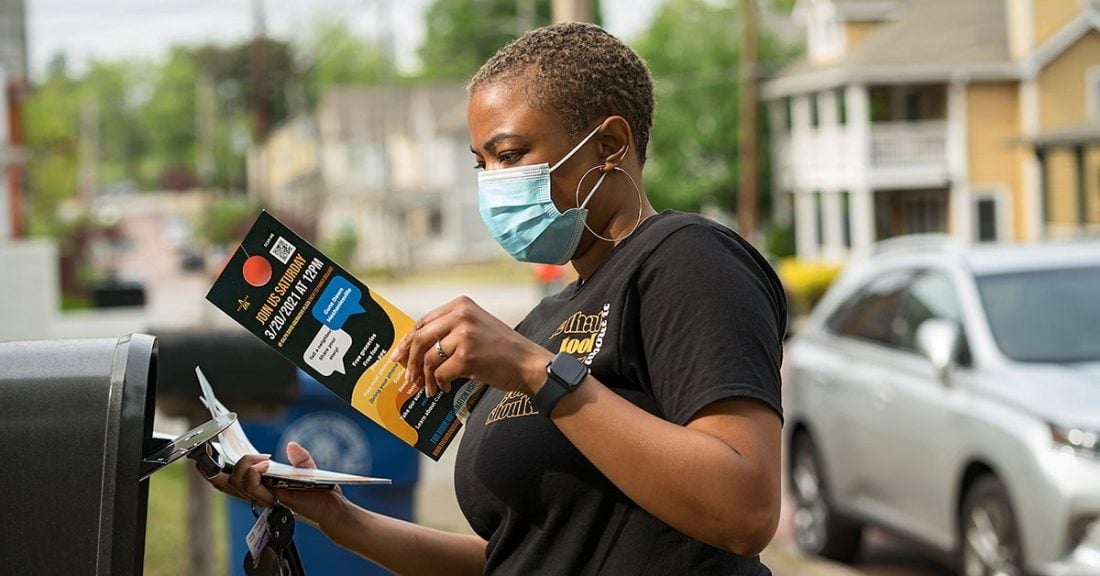 Public health strategies in Atlanta and Milwaukee have prevented gun homicides over the past several years, according to a new report by the Annie E. Casey Foundation. Often referred to as community-based violence interventions, the public health approach to the prevention of gun violence implemented in the two cities involve examining the root causes of conflicts, interrupting situations likely to result in gun shootings and promoting community-wide healing.

The report, Improving Community Safety Through Public Health Strategies: Lessons From Atlanta and Milwaukee, profiles work happening in the two cities that can help public and private entities — including government, service providers, funders, businesses and law enforcement agencies — reimagine their strategies for reducing gun violence in other American cities with methods that are rooted in public health and racial justice.

The work happening in Milwaukee and Atlanta’s Neighborhood Planning Unit V (NPU-V) — which includes the neighborhoods Adair Park, Capitol Gateway, Mechanicsville, Peoplestown, Pittsburgh and Summerhill — is part of a national movement. Various local public and private entities, including the Casey Foundation, have supported the new approaches to safety in the two cities.

The Biden administration has identified community violence interventions like these as crucial to its gun violence mitigation efforts nationwide, encouraging local governments to use federal funding from the American Rescue Plan to implement such programs. Studies show that these approaches have reduced shootings by more than 60% in cities where they have been implemented.

“The need for this work is urgent,” says Tomi Hiers, vice president of the Casey Foundation’s Center for Civic Sites and Community Change. “As communities continue to grapple with the effects of the COVID-19 pandemic — including spikes in homicides and other violent crime — as well as racial injustices and the resulting unrest, we must recognize the role that public and private entities play in empowering residents to lead community-safety efforts that center restorative approaches.”

For the past several years, the Casey Foundation has partnered with residents, nonprofits, hospital staff, local leaders and others in several communities in Atlanta and Milwaukee to:

Though gun violence has increased in these two cities over the past two years — as it has across the nation — local partners credit Cure Violence for slowing what would otherwise be a larger spike in deaths.

In Atlanta’s NPU-V, for example, gun homicides have remained relatively flat during the first half of 2021 compared to previous years, despite a 58% increase in homicides across the city through early June.

In response to the progress in NPU-V, the Atlanta City Council in June approved Mayor Keisha Lance Bottoms’ proposal to use $5 million in federal funds from the American Rescue Plan to expand community-based violence interventions in the city.

As the report details, local leaders and funders in both cities facilitated robust processes for resident input before launching policies to reduce gun violence, which was vital to building trust in communities.

For instance, the community process to develop Milwaukee’s Blueprint for Peace — its plan to implement community-based violence interventions and other programs — helped the city build a movement and raised the profile of gun violence as a public health issue across the city, says Reggie Moore, who served as director of the city’s Office of Violence Prevention from 2016 to April 2021.

“Instead of people seeing violence as an unsolvable issue we could do nothing about, it became understood that it is a systemic, learned behavior, for which new approaches can have an impact,” Moore says. “It has inspired hope.”

"The Casey Foundation didn’t come in with a plan and say, ‘This is what we’re going to do in your community,’” Garner says. “Instead, they asked, ‘What do you want to see happen in terms of safety in this community? How can we address gun violence? How can we help address trauma?’ All these questions and answers came out of a group of elders, community leaders and other stakeholders.”

The report’s lessons for funders and local officials who are interested in implementing and supporting community-based violence interventions include:

Safety is vital to building healthy, thriving communities in Atlanta, Milwaukee and communities across the nation. When people feel safe, they are more likely to trust public systems and access needed services, engage and advocate on behalf of their neighborhoods and pursue life and career goals.

Addressing violence is also key to building racial equity. Gun violence does not affect everyone equally, including in Atlanta and Milwaukee. Mirroring national trends, more than 80% of homicide victims in both cities in 2020 were Black males, many of them youth and young adults.

“It’s impossible for communities of color to thrive when they are not safe,” Hiers says. “Community-based violence interventions offer a proven path that does not focus on punitive measures or create interactions with the criminal-justice system. We hope that funders and public systems begin to acknowledge these programs’ effectiveness and join us in supporting them.”