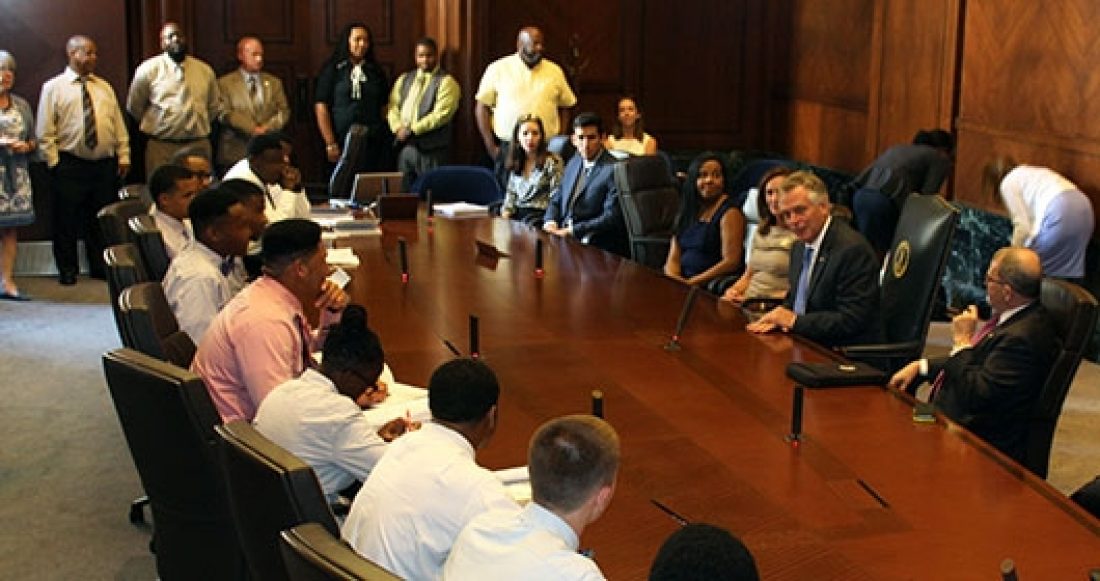 In a milestone encounter, youth and staff from Virginia’s two Juvenile Correctional Centers (JCCs) met with Virginia Gov. Terry McAuliffe recently at the statehouse to present their ideas about forming a resident government within the institutions. The unusual meeting was part of the governor’s work to take Virginia’s juvenile justice system in a new, more rehabilitative direction.

With bipartisan support from the state legislature, Gov. McAuliffe is leading efforts to transform the state’s juvenile justice system by replacing the two juvenile correction centers in the state with smaller, treatment-intensive secure care programs. The Casey Foundation has provided staff assistance and training to support Virginia’s reform efforts. Foundation President and CEO Patrick McCarthy has pledged to support states that join the Foundation’s commitment to close large secure juvenile facilities that resemble adult corrections facilities and replace them with a better model that helps kids leverage their strengths, includes families as a critical support system and ensures communities are equipped to provide needed services.

The new approach in Virginia emphasizes rehabilitation to help youth become successful adults. Research tells us that a vital tool to promoting youth development is engagement: the meaningful, sustained involvement of a young person in outside activities. To create more opportunities for engagement among youth in the JCCs, Virginia is revamping its Youth Advisory Councils. Historically, these councils have served as forums in which JCC residents can meet with facility superintendents to discuss their residential unit’s issues. Now, as part of the McAuliffe administration’s new direction, the councils are setting out to establish a form of representative government. This student government body will help residents have a voice and greater ownership of their units and “neighborhoods” (residential areas), and give them a chance to make recommendations on campus matters to all levels of management.

In the meeting with McAuliffe, First Lady Dorothy McAuliffe and the governor’s team, members of the Beaumont and Bon Air JCC Youth Advisory Councils, as well as staff from each facility, described how they would form a resident government. They listened to advice from senior government officials about the key elements of government, such as fair elections, constituent service and compromise.

McAuliffe visited the Beaumont JCC in January, becoming the first Virginia governor to do so. “We love you, and we want you to be successful,” the governor told a group of residents there. The governor referred to his interaction with justice-involved youth in his most recent State of the Commonwealth address. He noted that before Christmas, a group of young men from the Beaumont JCC visited the executive mansion to present the McAuliffes with a quilt that the youth had designed and created over the course of a year as a form of therapy. In his State of the Commonwealth address, the Governor emphasized the promise in youth’s lives and described the Virginia Department of Juvenile Justice’s new approach as one that emphasizes treatment, education and preparation for a productive life for youth.

The quilt is on display in the lobby of the Patrick Henry government building in Richmond.

Learn more about another governor’s pledge to close a youth prison.