No Place for Kids 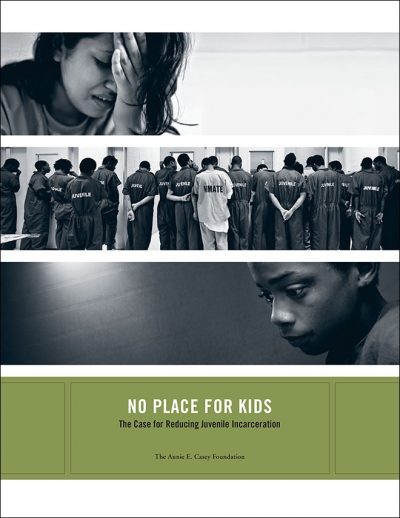 Backed with an array of research, the case against America’s youth prisons and correctional training schools can be neatly summarized in five words: dangerous, ineffective, unnecessary, wasteful and inadequate. This report highlights successful reform efforts from several states and provides recommendations for how states can reduce juvenile incarceration rates and redesign their juvenile correction systems to better serve young people and the public.

In addition to the full report, the Foundation published a No Place for Kids issue brief and a news release. As a supplement to the report, find state-level data on juvenile confinement in the Finding & Stats section below.

Systemic or recurring maltreatment is identified when clear evidence has emerged showing that one or more state-funded youth corrections facilities repeatedly failed to protect youth from violence by staff or other youth, sexual assaults and/or excessive use of isolation or restraints.

Juveniles Confined by Number and Rate

In 2007, there were 60,426 juveniles in committed custody, down from 75,406 in 1997. View the total number of juveniles committed in each state, as well as state confinement rates for youth during the same period.

Youth locked inside our nation's deep-end juvenile justice facilities are overwhelmingly the product of tragic circumstances, and it doesn't get better inside the sytem.

The Council of Juvenile Correctional Administrators and the American Correctional Association offer estimates on state budgets for juvenile corrections in 2008.

U.S. vs. Other Nations

An international comparision found that American's youth custody rates are nearly 5 times the rate of the next highest nation.

Does lowering juvenile confinement rates at the state level forshadow increased juvenile violence? Evidence from 1997 to 2007 says no.

Look at a state-by-state summary of systemic or recurring maltreatment in juvenile corrections facilities.

From 1997 to 2007, the juvenile arrest rate for violent index offenses dropped 26.9%. View youth arrest data by state for the same period.

Litigation and Investigations Over Conditions of Confinement

A look at recidivism by youth released from state-funded juvenile corrections facilities. Also, what are the state-by-state gaps in data collection involving recidivism?

A state-by-state look at juvenile correctional facilites closed since 2007, as well as other actions used to reduce facility populations.

The overall body of recidivism evidence indicates plainly that confinement in youth corrections facilities doesn’t work well as a strategy to steer delinquent youth away from crime.

The open question is whether our society will not only abandon the long-standing incarceration model, but also embrace a more constructive, human, and cost-effective paradigm for how we treat, educate, and punish youth who break the law