At Onset of the COVID-19 Pandemic, Dramatic and Rapid Reductions in Youth Detention 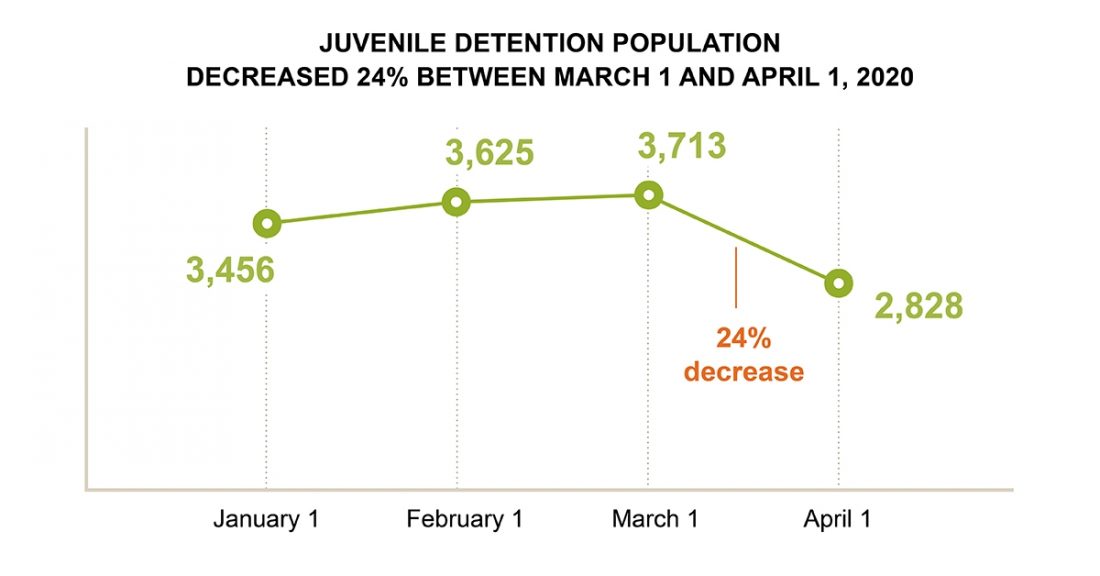 A survey of juvenile justice agencies in 30 states funded by the Annie E. Casey Foundation finds that the number of young people in local secure detention centers fell by 24% in March 2020, a sign that the coronavirus pandemic is dramatically altering the juvenile justice system. The percentage reduction in youth detention across these jurisdictions in a single month was as large as the national decline over seven years from 2010 to 2017.

Learn about the COVID-19 survey

The Casey Foundation is sharing this analysis of survey results, conducted with Pretrial Justice Institute and Empact Solutions, to illuminate patterns and trends in the juvenile justice system’s response to the pandemic. The survey covers a large number of jurisdictions — specifically communities involved in the Juvenile Detention Alternatives Initiative® (JDAI) — that represent approximately one-tenth of the counties in the United States. It is neither a random sample nor the basis of a national estimate.

The Role of Detention Centers in Juvenile Justice

Detention centers are different than youth prisons or other residential placements where young people could be sentenced after being adjudicated delinquent. Rather, detention is a crucial early phase in the juvenile justice process. It’s the point at which the courts decide whether to confine a young person pending their court hearing or while awaiting placement into a correctional or treatment facility rather than allowing the young person to remain at home.

Every year, an estimated 218,000 young people spend time in detention facilities nationwide, despite the negative effects of detention on young people and the continued racial disparities that define juvenile detention in this country.

“We are hoping this crisis teaches us that jurisdictions can safely reduce detention even more dramatically than many already have and keep young people who have been in trouble with the law safely in their communities,” says Lisa Hamilton, president and CEO of the Foundation.

“The juvenile justice system that emerges from this crisis will be profoundly different from the one that entered it just weeks ago,” says Nate Balis, director of the Foundation’s Juvenile Justice Strategy Group. “The sooner we can understand exactly how and why these changes are occurring, the better equipped we will be to ensure that the lasting changes will be positive ones.”

Begun almost three decades ago as a pilot project to reduce reliance on detention, JDAI reaches nearly one-third of the total U.S. youth population and is active in more than 300 cities and counties in 40 states and the District of Columbia.

The survey findings include the following:

The decrease in population was driven primarily by a steep decline in the rate of admissions. 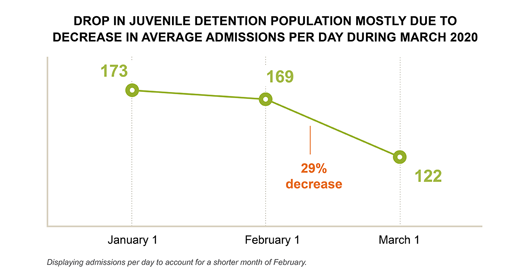 Jurisdictions increased the rate at which they were releasing young people from secure detention. 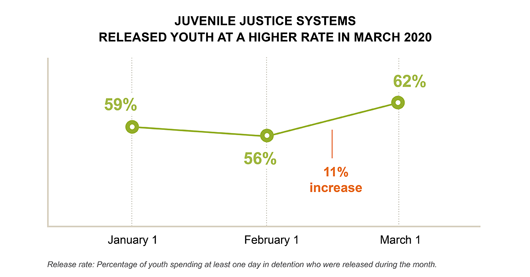 As of mid-April, most jurisdictions had no confirmed COVID-19 cases among their youth or staff.

This survey, conducted from April 8 to 17 and covering the period from January 1 to April 1, is unique because it reports on data from hundreds of jurisdictions in close to real time. Information came from large urban counties and small rural courts, among a wide range of jurisdictions that collectively held more than 3,700 youths in secure detention on March 1, 2020. For perspective, approximately 15,660 young people are held in detention nationally on any given night, according to the most recent federal data in 2017.

There are no direct points of comparison that place this one-month reduction in context. Available data on detention utilization from national surveys indicate that significant reductions in detention typically accrue over several years.

The Casey Foundation will continue to conduct and extend this monthly survey for the duration of the COVID-19 crisis.

There is no current national census against which the March 2020 data could be compared to give a sense of how large of a sample this survey reflects. But the most recent national census of youths in detention centers by the federal Office of Juvenile Justice and Delinquency Prevention, dated October 2017, found that there were 15,660 detained youths in residential placement at that time. The population counted in this survey is more than one-fifth of that figure.

This is a non-random sample, so not an accurate source from which to derive national estimates nor determine statistically how representative this group of jurisdictions is of the nation as a whole.

View the Casey Foundation's news release about this study

Learn about the COVID-19 survey