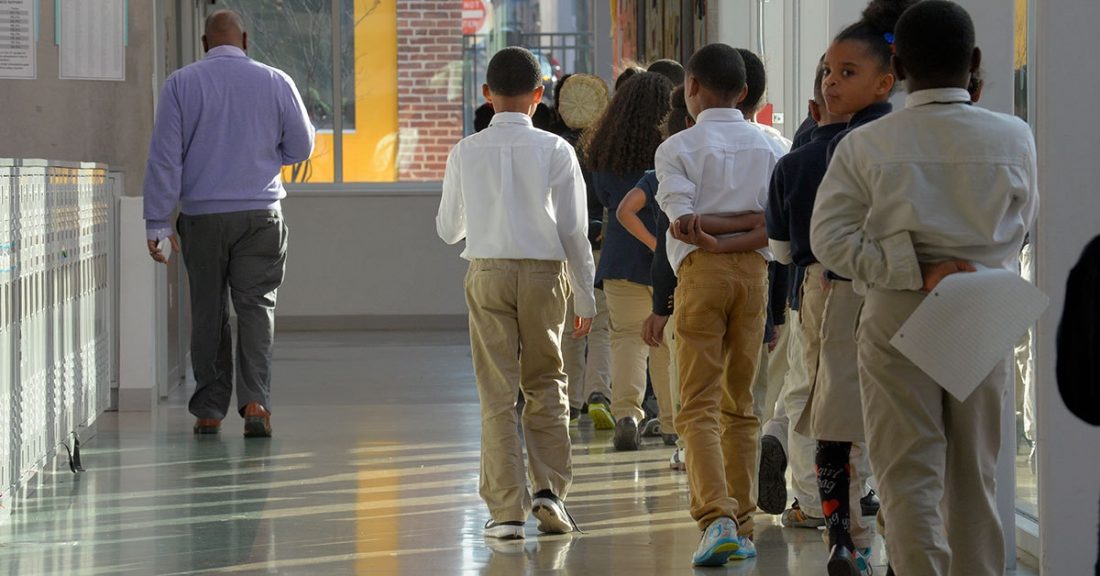 In late 2019, Baltimore City Public Schools began to educate staff about racial equity and the historic barriers that students of color have faced. The work is part of a broader district policy — adopted in June 2019 — that aims to implement an equity framework, in which officials work to remedy systemic issues that affect students of color.

To support the effort, the Annie E. Casey Foundation has funded staff training on racial equity and an implementation plan that will detail how the school system will work toward building equitable outcomes for students.

White students in Baltimore have historically outperformed African American students by a wide margin in tests measuring math and reading skills. That’s due to myriad factors, including historic segregation, underfunding of primarily African American schools and the impact poverty has had on those families.

“It’s imperative we find solutions to even the playing field for students of color so that educational outcomes are not predictable by race,” says Tracey L. Durant, executive director of the Office of Equity for Baltimore City Public Schools. “Overall, we seek to disrupt and dismantle systems that were intentionally created to — and continue to — afford advantages to some groups while perpetuating racial inequities for others.”

In their first school year implementing the equity policy, Durant and her office have focused heavily on training for all levels of staff in schools and in the district’s central office.

Using curriculum developed with Casey support, many district employees — including teachers, principals and other administrators — have attended two-day seminars in which they explored the historical context of race, both locally and nationally. Participants also reflect on their own racial consciousness and experiences.

By April, the school system plans to have least 500 staff members participate in the seminars.

Top school system administrators and key community partners and stakeholders also attended a summit in October hosted by Pacific Educational Group, an organization that works with educational groups to transform beliefs, behaviors and results so people of all races can achieve at the highest levels. At the summit, participants learned about a protocol for how to have honest, courageous conversations about race.

“Race impacts everything, and educators’ personal narratives about race matter, as well as their comfort level in speaking about issues related to race,” Durant says. “This is why it’s important to have them build the capacity necessary to address issues related to race, speak authentically and understand race’s impact on city schools. Systems don’t change until people do.”

Durant and other school leaders will also continue to build an implementation plan that will include how to measure success in numerous areas related to equity, such as:

In recent years, more and more school systems across the nation have adopted similar approaches to equity. The Atlanta Board of Education, for instance, approved a plan in April 2019 that calls on the district to remedy practices that often result in the overrepresentation of students of color in special education, discipline and alternative schools and the underrepresentation of students of color in gifted and talented and Advanced Placement courses.

“Putting a racial equity policy on the books is important,” says Roger Schulman, president of The Fund for Educational Excellence, who served on a task force that produced Baltimore City Public Schools’ racial equity policy. “It means that the goals set forth will not be tied to a specific leadership team but will continue to be part of a school system’s practices in perpetuity. We hope funders interested in this work — and other school systems impacted by historic racism — realize how profound a change that is.”

It’s key that equity policies remain in place over time, as it will likely take many years, perhaps decades, to reverse the effects that systemic racism has had on schools — both in Baltimore and throughout the nation, says Gena O’Keefe, a senior associate at the Casey Foundation.

“Things aren’t going to change overnight — this is long-term, culture-shifting work,” O’Keefe says. “Still, the Foundation is pleased it’s helping jumpstart the process of building a more equitable school system in Baltimore. We hope more area funders recognize how important it is to fund this work and partner with us.”

Learn approaches to advancing race equity within a system or organization