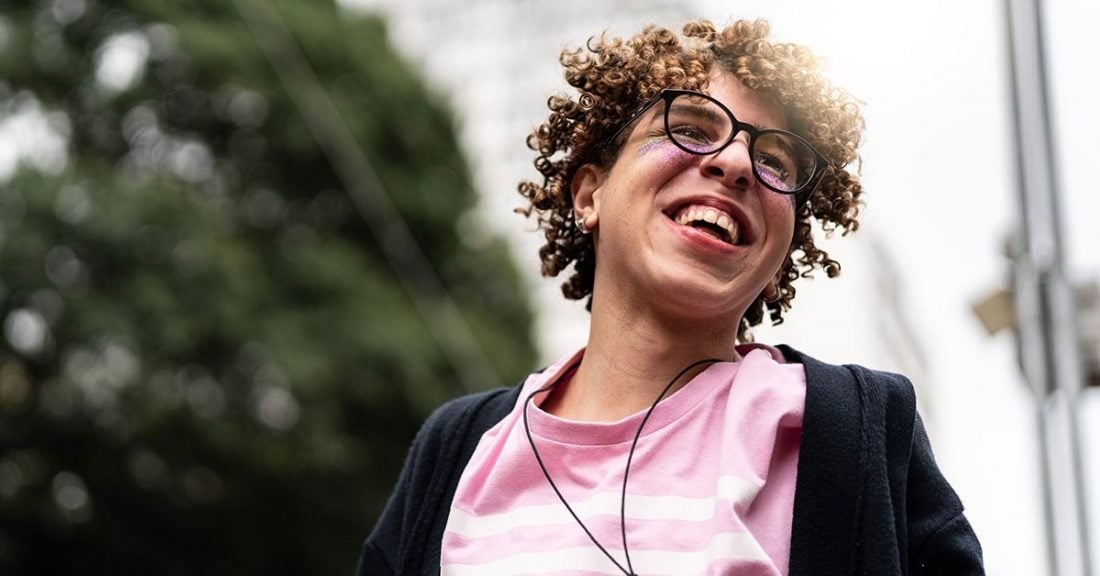 Growing up can be hard. Growing up identifying as lesbian, gay, bisexual, transgender, queer or questioning (LGBTQ) is even harder, according to national data.

Young people in the LGBTQ community face higher rates of rejection, violence, suicide and homelessness when compared to their general population peers. LGBTQ youth are also overrepresented in the child welfare and juvenile justice systems and more likely to drop out of school than their fellow classmates.

This post defines some common terms — and promotes the use of accurate, authentic and inclusive language — so that social workers, educators, foster parents and others are better equipped to support LGBTQ youth, serve as their advocates and help them thrive.

Describes a person whose gender identity matches the sex — male or female — originally identified on their birth certificate (i.e., people who are not transgender). Cisgender, which is pronounced sis-gender, describes only a person’s gender identity — not their sexual or romantic attractions.

Describes a person who does not identify as exclusively male or exclusively female and usually prefers “they” as a pronoun. Enby is the phonetic pronunciation of “NB,” which stands for nonbinary. Not all nonbinary individuals prefer or use this term.

A social construct used to classify a person as a man, woman or some other identity. Fundamentally different from sex assigned at birth, gender is often closely related to the role that a person plays or is expected to play in society.

A surgical procedure that enables an individual’s body to be more congruent with their gender identity. Also referred to as sex reassignment surgery or gender confirming surgery.

Describes the extreme discomfort that a person feels because their assigned sex at birth does not match their gender identity. This sense of unease or dissatisfaction can cause depression and anxiety and negatively impact an individual’s daily life.

How individuals communicate their gender to others through their clothing, speech, mannerisms and other factors. Gender expression is not the same thing as gender identity. A person can express one gender yet identify with another.

A person’s internal identification as male, female, something in between or something other than the two conventional gender options. A person’s gender identity is not visible to others and can match or differ from their assigned sex at birth.

Describes a person who does not adhere to the traditional expectations — in terms of their appearance or behavior — of their assigned gender. Some of these individuals identify as transgender but others, for example, masculine lesbians, do not.

Describes a person who is attracted — physically and emotionally — to individuals of the opposite sex. Otherwise known as a straight person.

Describes a person who is attracted — physically and emotionally — to people of the same sex. This term is outdated and disfavored in the LGBTQ community.

Describes a person born with sex characteristics that are not typical for male or female bodies. Sex characteristics are physical features relating to sex — including chromosomes, genitals, hormones and other reproductive anatomy — as well as secondary features that emerge from puberty. Intersex is an umbrella term, and intersex characteristics and traits are not always apparent or identified at birth.

An acronym used to describe lesbian, gay, bisexual, transgender, queer or questioning persons or the community. Avoid using the term “gay community,” as it does not accurately account for the community’s diversity.

Describes a person who is attracted to — or has the potential to be attracted to — people of any gender or gender identity. This attraction can be emotional or physical.

An adjective used by some people, particularly younger people, whose sexual orientation is not exclusively heterosexual. Queer was once used a pejorative term and has been reclaimed by some — but not all — members of the LGBTQ community.

Describes a person who is still discovering and exploring their sexual orientation, gender identity, gender expression or some combination thereof. Using this term enables an individual to identify as part of the LGBTQ community while avoiding other labels and recognizing that their process of self-identification is still underway.

The classification of a person as male or female. At birth, babies are assigned a sex that typically corresponds with their external anatomy. Yet an individual’s sex is influenced by a larger combination of factors, including their chromosomes, genes, hormones, reproductive organs and secondary sex characteristics.

An enduring emotional and/or physical attraction (or non-attraction) to other people. Sexual orientation is fluid and encompasses a variety of labels, including gay, lesbian, heterosexual, bisexual, pansexual and asexual.

Describes a person whose gender identity and/or gender expression do not match their assigned sex at birth. Transgender people may be straight, lesbian, gay, bisexual or queer.

Describes a person who was assigned a female sex at birth but identifies as male. This person may or may not actively identify as trans.

Describes a person who was assigned a male sex at birth but identifies as female. This person may or may not actively identify as trans.

A complex process by which transgender people align their anatomy (medical transition) and gender expression (social transition) with their gender identity. Transitioning is a multiple-step process that occurs over a long period of time. It can include such steps as using a different name, using new pronouns, dressing differently, updating legal documents, hormone therapy and surgery. The exact steps involved in a person’s transition varies.